We measure the value of an item usually based on how much you paid for it. The price is usually determined by the effort put into creating it, the rarity of the materials, etc. some of the most common things are relatively cheap because we find it everywhere, but the cheaper it is, the cheaper the quality. We tend to desire things of great value. Somehow we determine that the more expensive something is the more valuable it is.

God love isn’t cheap. So why do we sometimes regard it like a pair of Payless sneakers?

“…but God shows his love for us in that while we were still sinners, Christ died for us. Since, therefore, we have now been justified by his blood, much more shall we be saved by him from the wrath of God. For if while we were enemies we were reconciled to God by the death of his Son, much more, now that we are reconciled, shall we be saved by his life. More than that, we also rejoice in God through our Lord Jesus Christ, through whom we have now received reconciliation.

Here, the Apostle Paul is emphasizing to the Romans that when we were lost in our selfishness, God expressed the ultimate selflessness. His love for us gave us an answer to our separation from God. He gave up himself to save us from the wrath we deserved from Him.

If you’ve ever seen the film King Arthur that was released in 2017 you’re familiar with the story. Arthur came from nothing and had removed the sword Excalibur from the stone. Not knowing much of its significance, he was captured and sentenced to execution by the enemy. In this execution scene the whole kingdom was gathered to watch this unknown person get executed.

Excalibur was legendary; the person who could remove the sword from the stone was said to be special; royalty. In the scene where Arthur is about to be beheaded, the Mage from afar turns every single animal against the army. Dogs, horses, and birds create huge chaos as they begin to attack every single member of the Kingdom’s guard. In the scene we see a few Good men scramble to rescue Arthur from this huge disaster.

This scene moved me to tears. I’m talking real tears and weeping. It was during this moment in the theater I was reminded of God’s love for me and the great Lengths he has gone to show me this love. The price he paid for me to change my mind about myself. His love for us did not come cheap. When we meant nothing to ourselves, Christ gave himself for us. When the enemy of our soul appears to be winning God spends His all just to save us. When we hate everything about God he pulls out all the stops. There’s nothing more God can do to make this point stronger.

“Greater love hath no man than this, that a man lay down his life for his friends.”

Jesus stresses to His disciples what love is. Love sacrifices. It is not affordable. There is a measure of inconvenience that Love demands. And God proved it by becoming the very thing he hated (sin) to elevate us to be in good standing with him. (2 Corinthians 5:21)

Love cannot leave you in the same position for too long- it changes you. We become less selfish, less petty, less of me and more like Jesus.

It cost the Almighty God Himself to show us what Love is. That kind of Love can never be cheap.

How To Do One of My Quick Go-to Sisterlocks Hairstyles 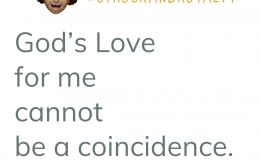 How To Do One of My Quick Go-to Sisterlocks Hairstyles